This week we’re previewing a whole host of miasmic morsels from the new Death Guard codex, which is available to pre-order this Saturday. To start things off, we’ve picked seven* of our favourite new rules to share with you – after all, Grandfather Nurgle loves sharing… 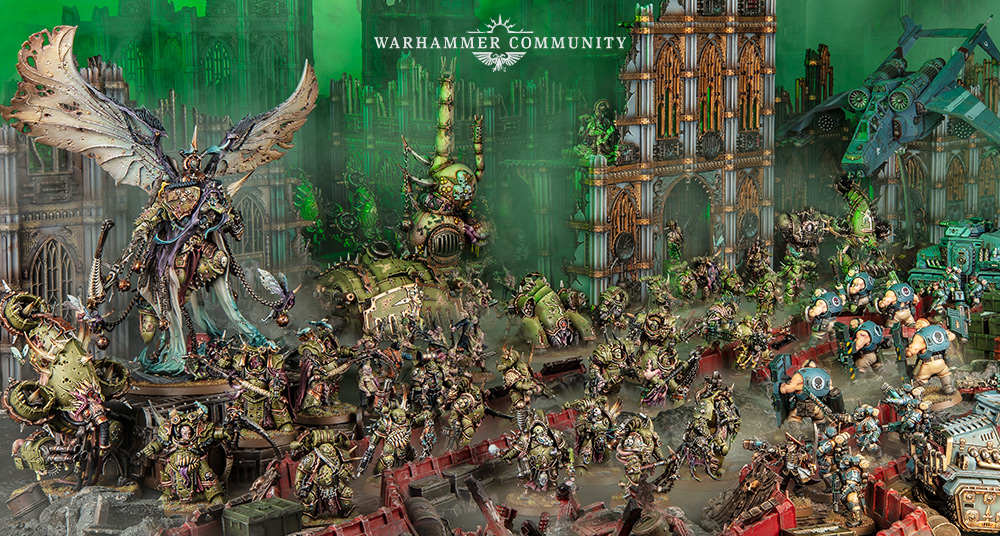 Back in December, we gave you a first look at the new datasheet for Mortarion – check it out if you haven’t already – but many questions were left unanswered. What, for instance, is his Warlord Trait? We’re glad you asked. 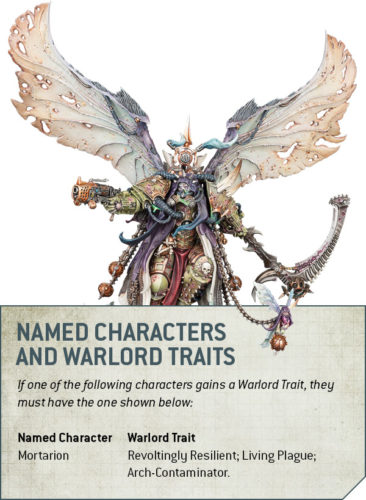 That’s right, the Daemon Primarch has not one, but three traits when he takes to the field as your Warlord. We’ve already seen how tough the chosen of Nurgle are thanks to their Disgustingly Resilient rule, but now that he’s Revoltingly Resilient too** it’ll be even harder to put a scratch on the favoured son of Nurgle. Combined with his Host of Plagues ability giving him a choice of one more Warlord Trait from among the six Plague Companies, he’s stuffed to bursting with special rules to terrorise your opponents with. 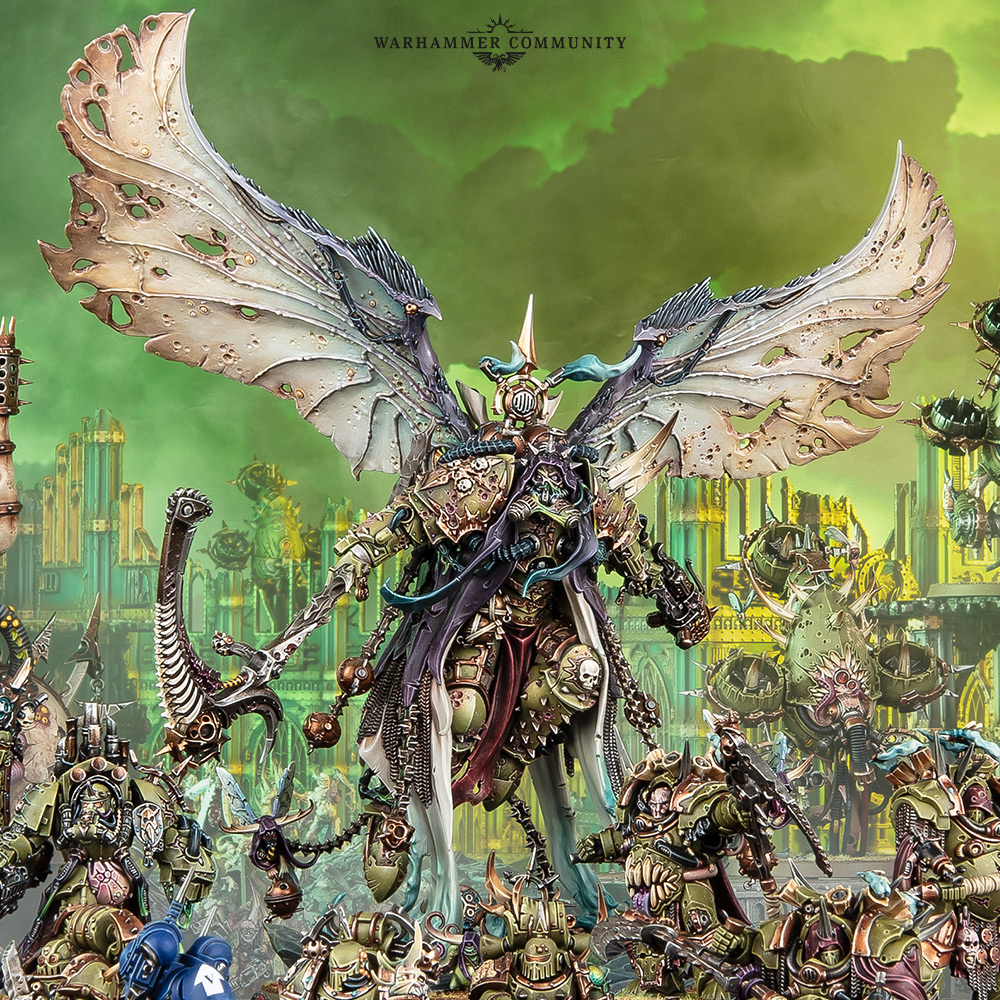 Everybody’s favourite shambling sacks of sepsis have always been a mainstay on the table alongside their Plague Marine betters. What the unwise might have seen as a mere meat shield before are about to become a threat to be respected. 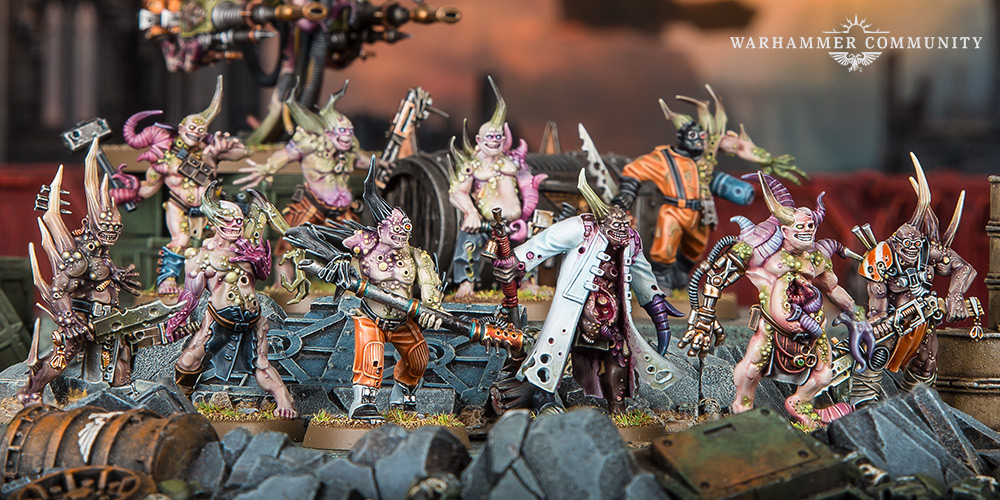 Of particular note is that their close combat prowess is no longer determined by the size of the mob – instead, they hit on a 4+ as standard. Coupled with a new base Toughness of 4, they’re sure to form a dangerous wall of moaning, groaning bodies, daring the enemy to come within their grasp. 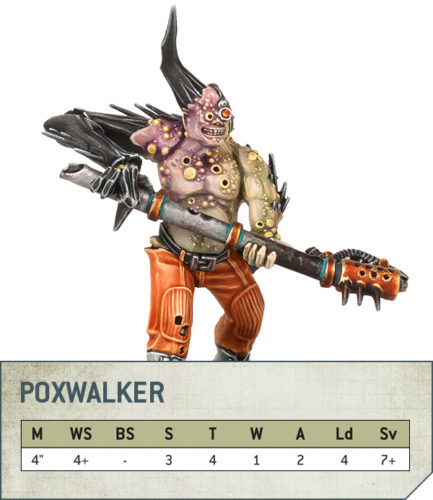 You might think all this newfound power comes with a price tag, but they’re even cheaper than before. There’s truly never been a better time to flood the table with the cursed victims of the Walking Pox.

Regular Chaos Lords of the Death Guard have cause to rejoice, as they now have the resilience to match their pestilent brothers-in-arms. While originally they had more in common with their unblessed peers among the Traitor Legions, now both Chaos Lords and Sorcerers of the Death Guard have Toughness 5, Contagions of Nurgle, and Disgustingly Resilient to better fit into your armies. No longer will they have to abide such an affront to their pride as matching the Toughness of their False Emperor-worshipping counterparts. 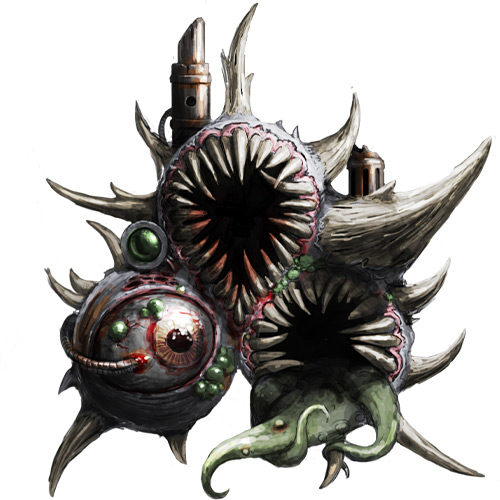 Speaking of the Contagions of Nurgle, we mentioned last week that each Plague Company will have its own special brand of ‘gift’ to bequeath unto their Warlord. Here are two more for you to salivate over ahead of the full codex release. 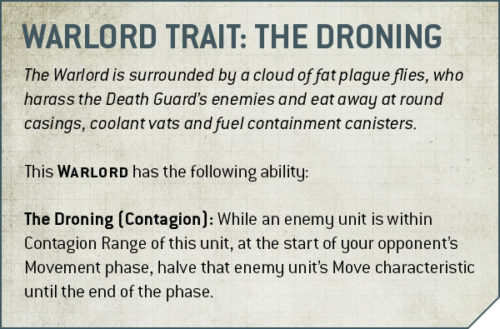 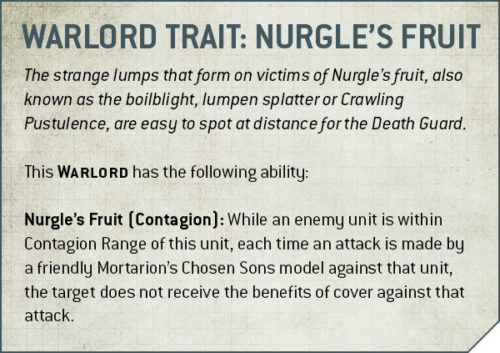 Your choppiest Terminators just got even choppier. While star billing might go to their increased Weapon Skill of 2+, befitting the close combat specialists of the Death Guard, their vicious manreapers won’t be left behind with two new close combat profiles for you to choose from. 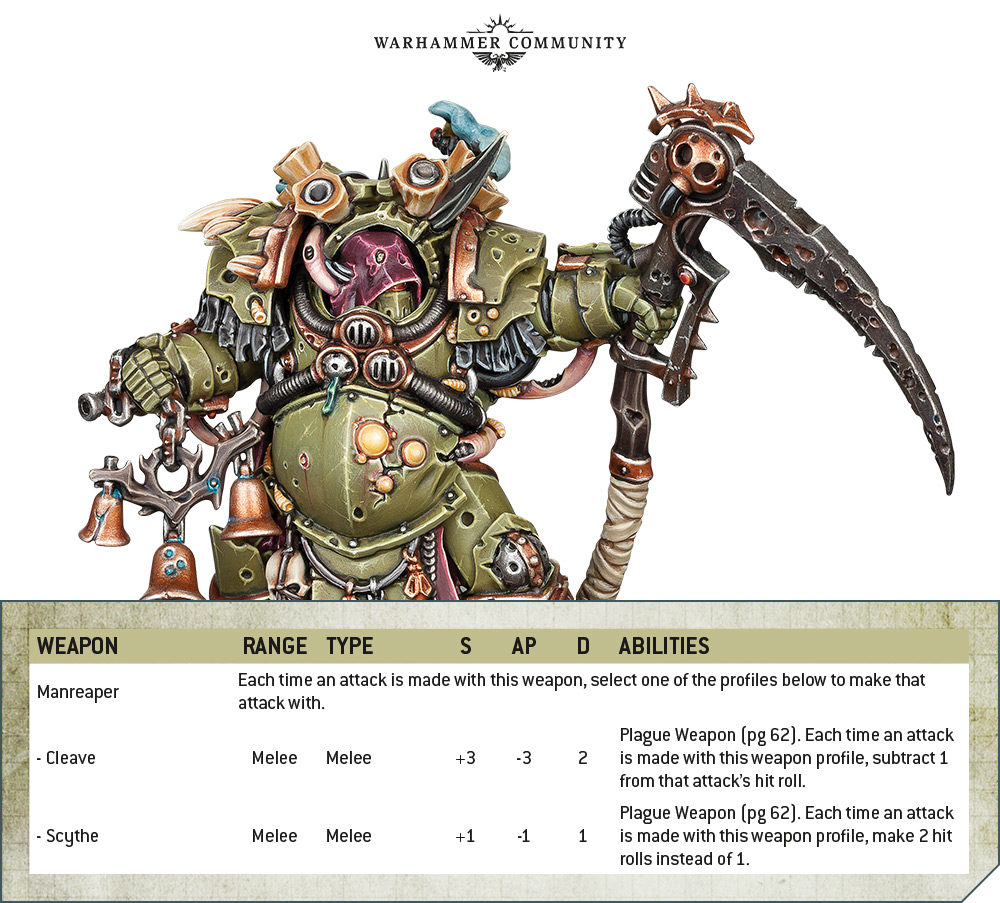 Neither Elite warriors nor massed Infantry will interrupt the inexorable advance of these silent messengers of Nurgle, and advance they will. The Deathshroud have clearly been doing their cardio, as their heavy Cataphractii Terminator plate no longer slows them down and allows them to advance just as quickly as everyone else. 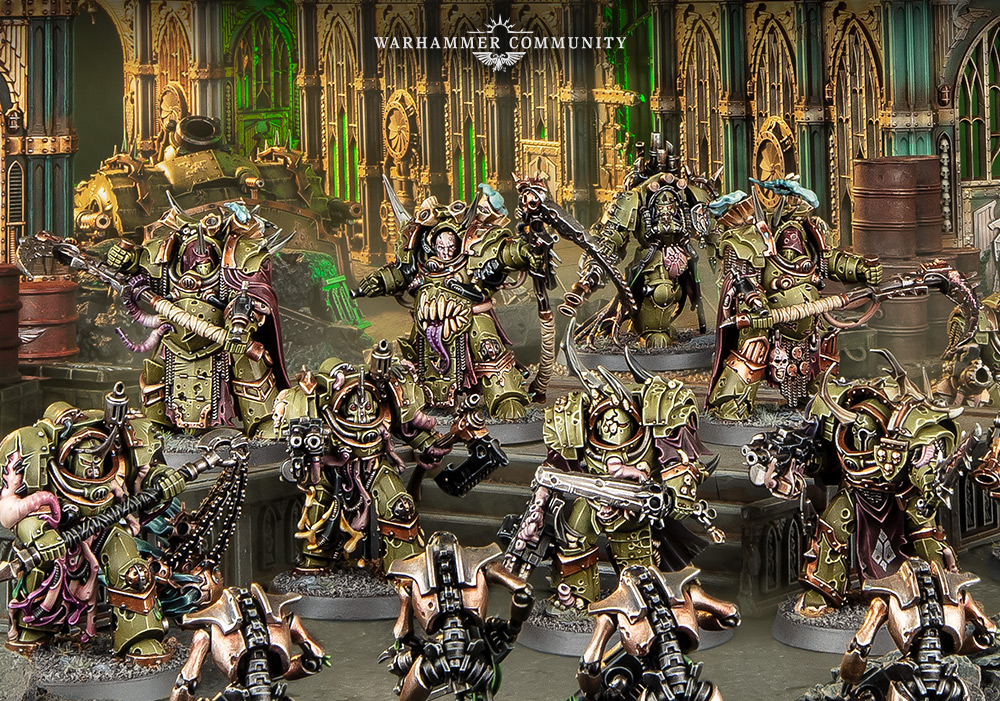 Finally, as true heralds of Nurgle’s plagues, Deathshroud Terminators are equipped to spread his concoctions even further than the rest of their brethren, adding three inches to the range of their Contagions of Nurgle ability thanks to the chimes of contagion. Just in case your opponents needed any more reasons to give them a wide berth.

6. Custom Contagions for your Crusades 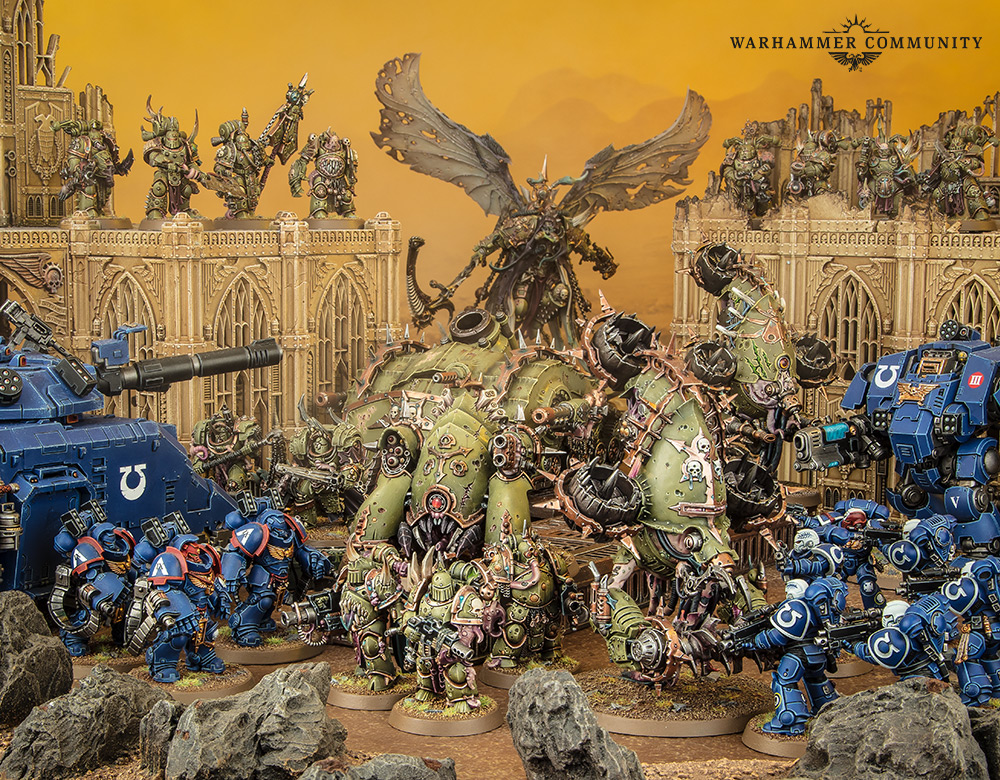 An all-new suite of Crusade rules will take your campaigns of corruption to new heights, with wonderfully thematic Battle Traits and Requisitions to upgrade your units. Of particular note, is the ability to craft and customise your own bespoke Plague to spread among your opponents’ armies. By randomly determining a Vector, an Infection, and a Terminus, you can bring all sorts of unholy effects to bear upon your foes. 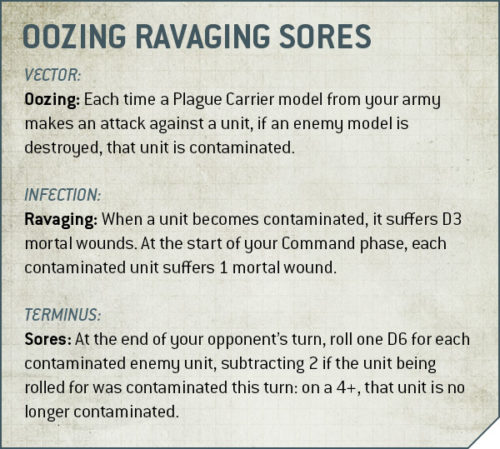 Like many Plagues, you also have the option of evolving yours over time, but you’ll need to stay tuned to Warhammer Community to find out how you can do that later this week.

Finally, another unit we mentioned last week has a new lease on life with an upgraded close combat capability thanks to the fearsome fleshmower. 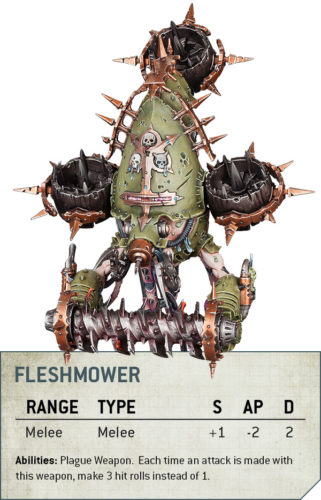 With a horde-spooking maximum of 12 attacks each*** and a new Weapon Skill of 3+, Bloat-drones will now have to think long and hard about whether they want to spread the gifts of Nurgle up close or from afar. They may have lost a Wound but no longer lose effectiveness as they’re damaged, so you have more reason than ever to fly them right across the field and into your enemies’ ranks. 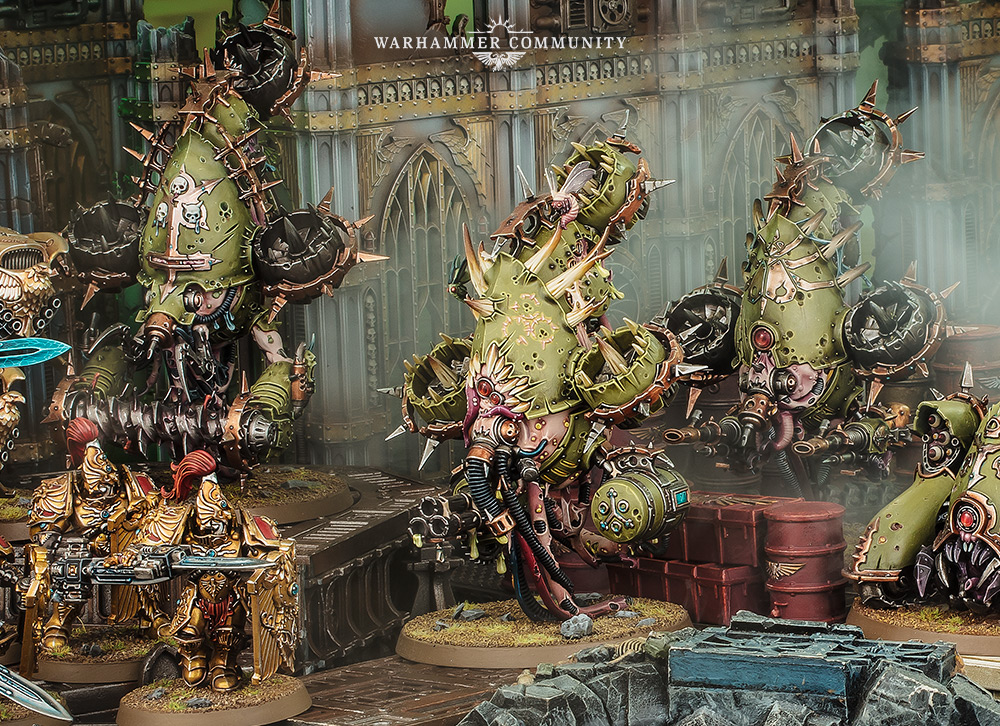 Phew, Grandfather Nurgle does indeed provide. That’s all we have for you today, but there’s still plenty more Death Guard content coming this week as we prepare for their pre-orders to go live on Saturday. Keep your eyes peeled for more new details on the upgraded XIV Legion, and let us know on Facebook, Twitter, and Instagram what you’re looking forward to in the new codex.