We've collected everything you need to create your perfect character in the world's favourite D&D alternative: Pathfinder 2E

Picking a character class is possibly the most important choice you’ll make when playing Pathfinder second edition (2E). Your character’s class governs their abilities, dictates their potential skills, and defines their role in your adventuring party. But a cursory glance at the many options available may make your choice seem more intimidating than it ought to. Don’t panic – we’re here to provide a guiding hand.

There are 12 classes in the Pathfinder 2E Core Rulebook. Many closely align with familiar fantasy archetypes, but all are worth learning about. Each has its own particular playstyle and favoured means of interacting with the world and solving problems – both in and outside of combat. Classes are the framework through which characters are brought to life and your chosen class shapes how they will make their mark in the world. So: spend some time weighing the options and choose wisely – it will radically alter how you play the game.

We’ll walk you through all the classes mentioned within the Pathfinder 2E Core Rulebook, introducing their basic features and stats. We hope it will allow you to better grasp their differences and settle on one that takes your fancy. Whether you’re a new player or a roleplaying veteran, read and we hope you’ll enjoy our guide to Pathfinder’s studious wizards, faithful champions, meditative monks, and assorted adventuring folk.

When choosing a class in Pathfinder, it’s important to consider what you hope to get out of the game. Some classes are adept at damage-dealing, suited to players craving the rush of combat. Others provide party support and cater to those happy to stick to the fringes of any dispute.  Yet others shine outside of combat, as diplomats or nimble-fingered thieves, ideal choices for players eager to lean into the roleplaying side of the game.

To understand the role of each class, look at their ‘key ability’ score. This guides their role within the party and dictates their general attributes. Classes’ mightiest feats and most impressive powers are tied to their key ability, and it must be upgraded if your character is to unlock their maximum potential. The six ability scores are:

Some classes rely on two key abilities, such as the Fighter, who may specialise in Strength or Dexterity, depending on whether they favour melee or ranged combat. But most have only one key ability, such as the Wizard, who relies on Intelligence for spellcasting. When picking a class, consider its key ability and whether it represents the kind of function you’d like to take up in the party. And make sure to read the full description to understand their peculiarities. 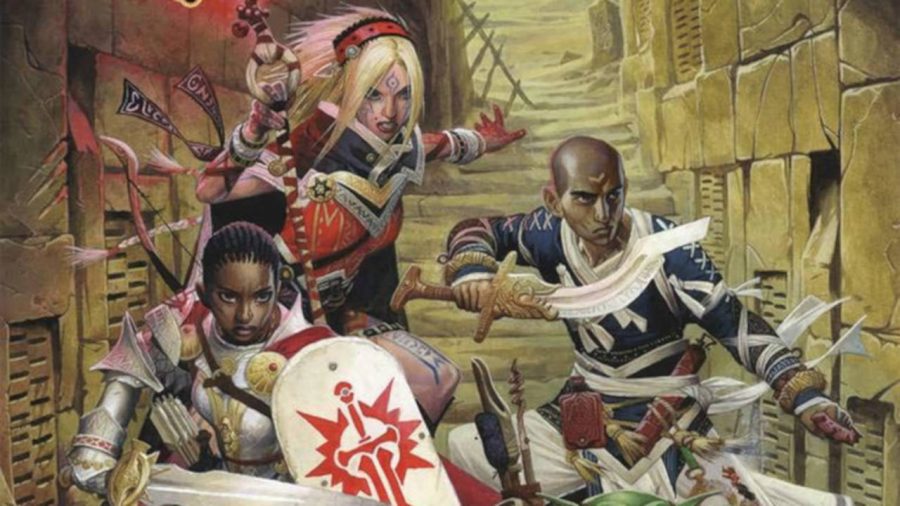 Make sure you check out all the classes to understand the strengths and weaknesses of your whole adventuring party. That way, you’ll be ready for any foe that dares defy you. 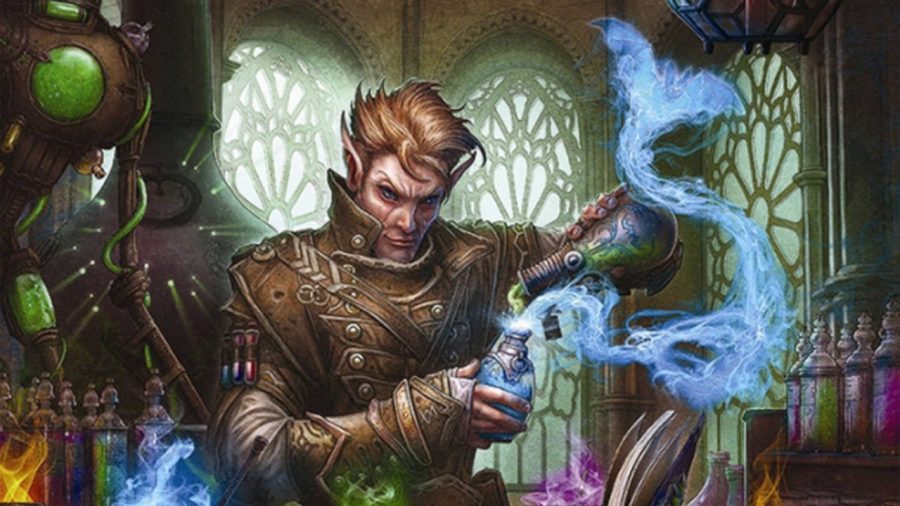 Inventive, resourceful, and possessed of a flagrant disregard for the natural order of things, Alchemists can be best likened to mad scientists. A hybrid, support and ranged damage class, Alchemists lob homemade concoctions at enemies, while assisting their party by providing potent elixirs and trap-busting brews. Players can lean into a more specific party-role, as they level up and specialise in a research field.

The innate eccentricity of Alchemists provides a fantastic framework for roleplaying, and their class-specific abilities – such as sticky bombs or invincibility mutagens – make for effective combat support. Prioritize raising your Intelligence score to support your potion-making, and Wisdom to upgrade the effectiveness of whatever concoctions you brew. 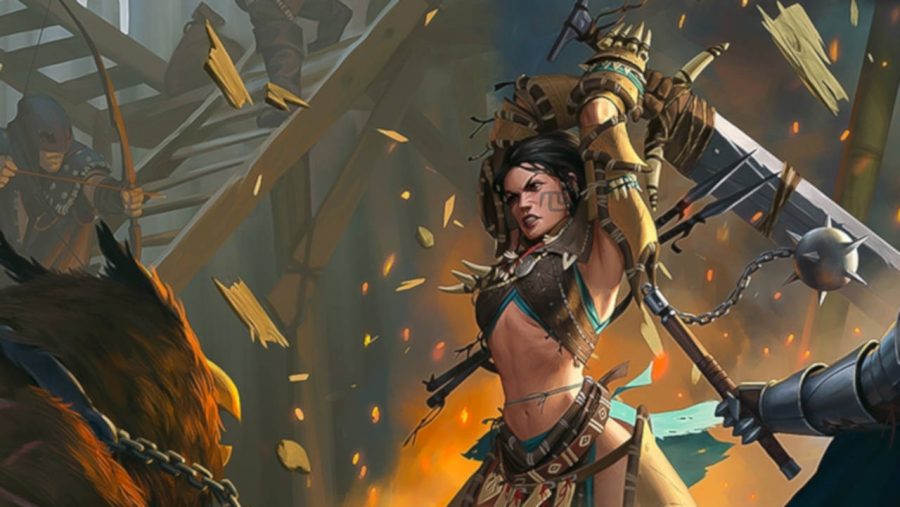 Barbarians know nothing but rage. Forever opting for brute force over careful deliberation, they crave conflict and are at their best when in the throes of battle. High damage-dealers with powerful weapons and hardy, if limited, defences, Barbarians crush their foes through raw muscle. But dispatch your enemies quickly, or they will exploit your weaknesses and leave you crumpled. Barbarians can tap into that inner fury to unleash their aptly-named ‘Rage’ ability, dealing extra-devastating blows in melee combat.

Strength is vital to building a Barbarian, but Constitution and Dexterity should be given some thought, too, in order to increase your character’s durability. Although a simple, combat-focused class, the scope to carefully balance weapon specialisations, and a choice of ‘instincts’ through which to channel your rage, provides variability. 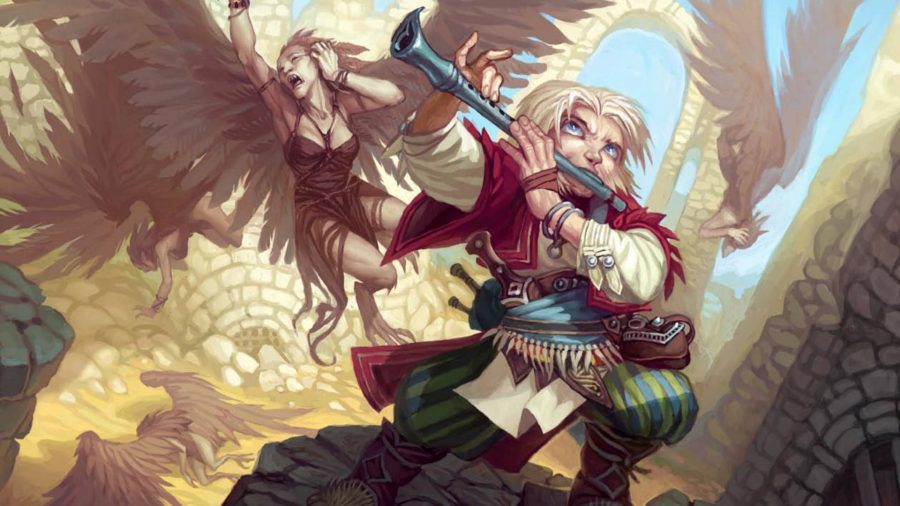 For Bards, versatility is the name of the game. Prevaricating tricksters that can talk their way out of any dispute, Bards are confident leaders that shine during social interactions but also bring a deft helping hand to any battle. Magical musical performances will see you deal harrying attacks to otherwise-engaged enemies, while providing dynamic buffs to your teammates.

Jacks of all trades but certainly not masters of none, Bards specialise as they level up but retain an abundance of varied spells, and a choice of powerful ‘muses’ grant captivating special abilities. Focus on Charisma to support your spellcasting and sweet-talking. Bard is a great choice for those wanting to lean into the roleplaying side of Pathfinder, and embrace a creative playstyle. 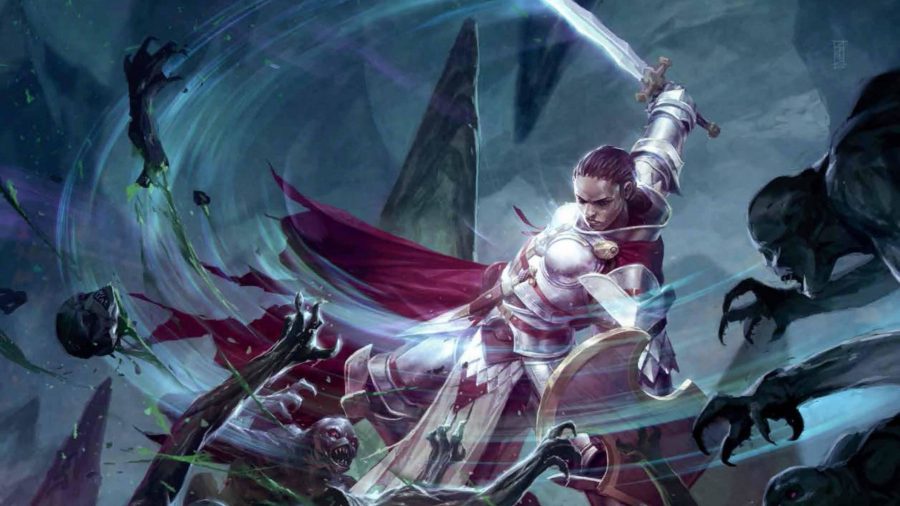 Champions are devoted servants of deities. They follow strict codes of conduct and uphold justice for all in need. Deft in hand-to-hand combat and equipped with heavy armour, they’ll often seek a peaceful conflict resolution, but will not hesitate to call upon their divine benefactors to aid them in battle and inspire their party.

Idealistic, uncompromising and ethically assured, Champions follow a deity that matches their alignment, receiving powerful devotion spells and weaponry in reward for their faith. Similar to the Paladin class in Dungeons and Dragons, Champions are well-rounded in combat and powerful personalities in social interactions. Prioritize Strength to improve your combat abilities, and Charisma to advance the effectiveness of devotion spells. 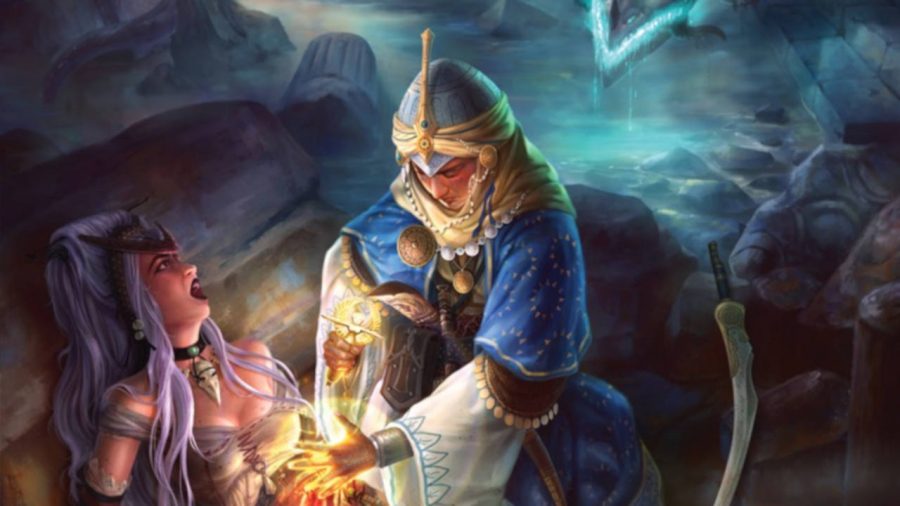 More interested in helping your teammates than performing flashy fighting moves? If so, consider the Cleric. Another class of godly adherents, Clerics are blessed with divine magic that they channel to heal teammates and punish enemies. Trained in simple weapons, they can also jump into the fray of melee combat for more direct damage-dealing.

There’s a lot of choice for a Cleric. You can just as easly become a cloistered, back-line support character that primarily casts spells to buff or protect their party, or build a militant war-priest that balances spell-casting with the traditional weaponry of their favoured deity. Choosing which deity to worship is in many ways the biggest choice of all – it decides which spells fill your spellbook, and the nature of the divine energy that radiates through your body. 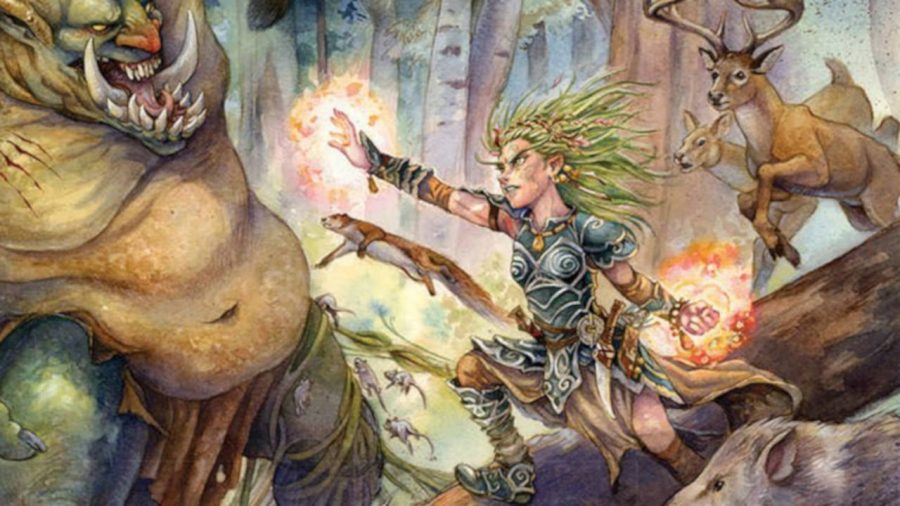 Green-thumbed roleplayers may be tempted by the Druid, who harnesses the mighty power of nature to bring ruin to their enemies and beautiful bounties to those who respect the natural world. Although possessing some healing abilities, the real charm of Druids is their distinct polymorphing ability and conjuring spells. Transform into a wild beast, use elemental magic to smite enemies with bolts of lightning, or summon sentient plant life to drag enemies to a thorny, viny end – their novelty makes for creative, engaging play.

Druids’ strong ideals and distinct personalities also make them conducive to impassioned roleplaying, providing a clear, solid base from which to flesh out your character. Prioritize Wisdom for spellcasting, but follow it up closely with Strength for damage-dealing and Constitution to improve your defences. 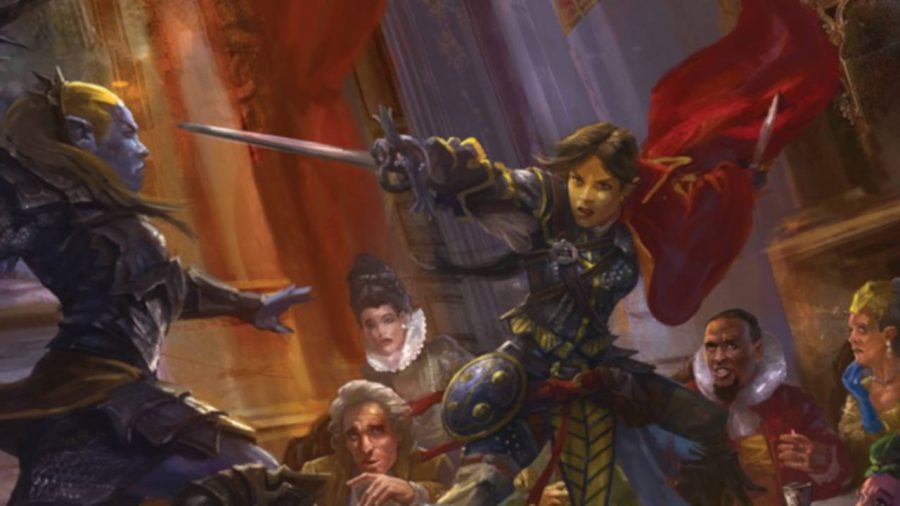 While Barbarians dominate melee combat through brutish strength, Fighters (of all varieties) do so through masterful combat techniques. Duelists use sword-swinging finesse to out-manoeuvre and disarm their opponents, while Sharpshooters pinpoint fatal shots from afar. Specialised flourishes and combat stances can be combined for powerful damage-dealing effects that make quick work of the toughest foes. Use these techniques effectively to exploit key opportunities and enemy weaknesses.

Something of a blank canvas, Fighters are malleable roleplaying sponges that can be easily moulded into your preferred backstory. Investing in Dexterity will improve your character’s maneuverability, while a Strength and Constitution combo can up their damage. Specialize with forethought to your intended fighting style. 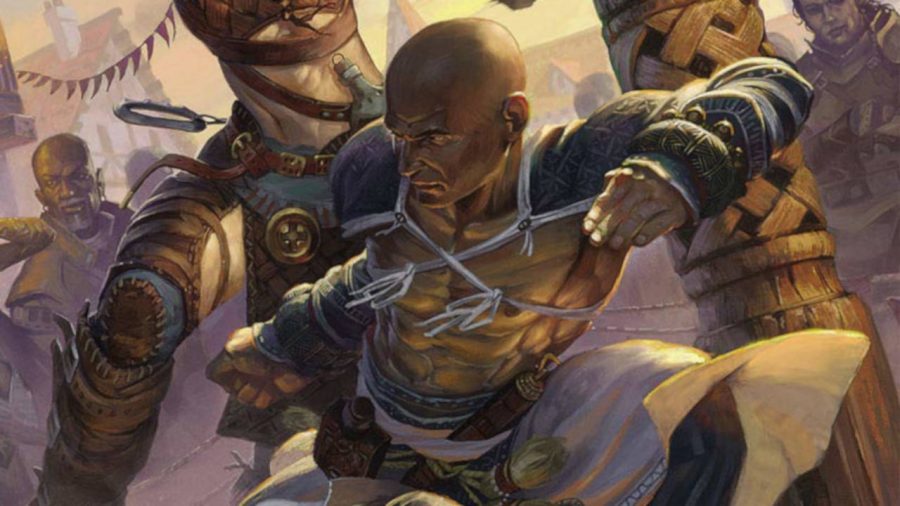 Monks replace Fighters’ extensive weapons training with mastery of unarmed combat. Drawing on typical martial arts tropes, Monks are spiritual, highly disciplined warriors that rely on various combat stances and fighting styles to achieve physical fighting perfection. Their fighting is acrobatic – leaping through the air and rolling across the battle – and their ability to dodge traps or jump over chasms makes them effective party scouts.

Monks are typically played as introspective philosophers in search of truth and enlightenment. They make a meditative contribution to an otherwise hot-headed party. Prioritise Strength, although Constitution will be essential to improve your defences – especially important, since most monks don’t wear armour. 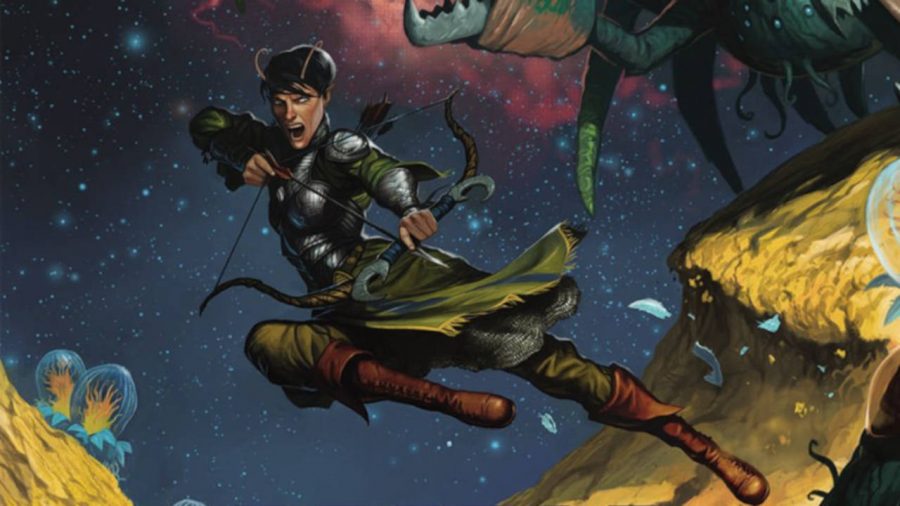 Grizzled hunters and insightful trackers, rangers are masters of the wild that enjoy the most versatile combat capabilities of any class. Adept at both melee and ranged combat, they may be trained in duel-wielding or specialised archery builds. Unlike the first edition of Pathfinder and D&D 5E, rangers cannot cast spells, but powerful feats like ‘Animal Companion’ and ‘Favoured Terrain’ ensure Rangers can be effective in and out of combat.

Focus on raising your Dexterity score, and closely plan your character progression, as many of the higher-level feats rely on previous acquisitions. Rangers’ versatility makes them a powerful combat force. 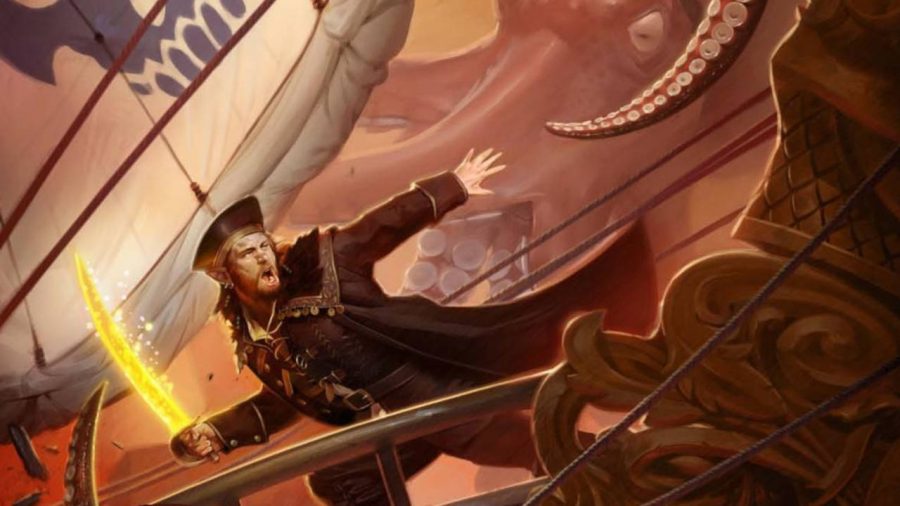 Enigmatic and dangerous, Rogues use stealth and needle-sharp cunning to catch their enemies off guard. They are peculiarly adept at laying ambushes or subtly harming enemies through trickery, sabotage and concealed weaponry. Rogues belong to distinct ‘rackets’ that offer more personalised advantages. Scoundrels, for example, use their silver tongues to con their way out of troublesome spots, while Ruffians are more inclined to show some muscle and intimate their opponents into submission.

Rogues make valuable assets on the campaign trail, too, and their skills in pickpocketing, lockpicking, and trap-disarming are essential to finding hidden loot or avoiding fatal confrontations. Prioritise Dexterity to make the most of your devious, dextrous pursuits. 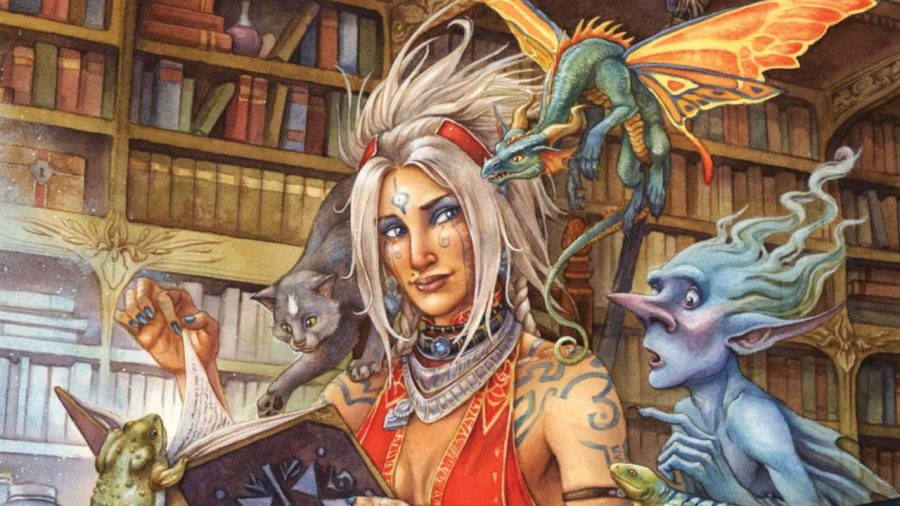 Sorcerers derive their magical capabilities from their bloodlines, and rely on emotive forces and willpower to cast powerful spells. Their combat role is primarily to cast offensive spells that attack or disrupt the enemy, but their magical detection ability makes them well suited to finding hidden loot or traversing traps when exploring dungeons.

The most important choice when playing as a Sorcerer is choosing your bloodline. From demonic heritages that imbue power through sinful corruption, to draconic bloodlines that trace the lineage of dragons, the many options available will determine your spell repertoire and the tradition of magic your character follows. The bloodline premise makes for a fantastic base point for a backstory or wider roleplaying narrative, and the strong abilities and personalities of Sorcerers accustom them to leading parties. Prioritise Charisma to unlock your natural magical potential. 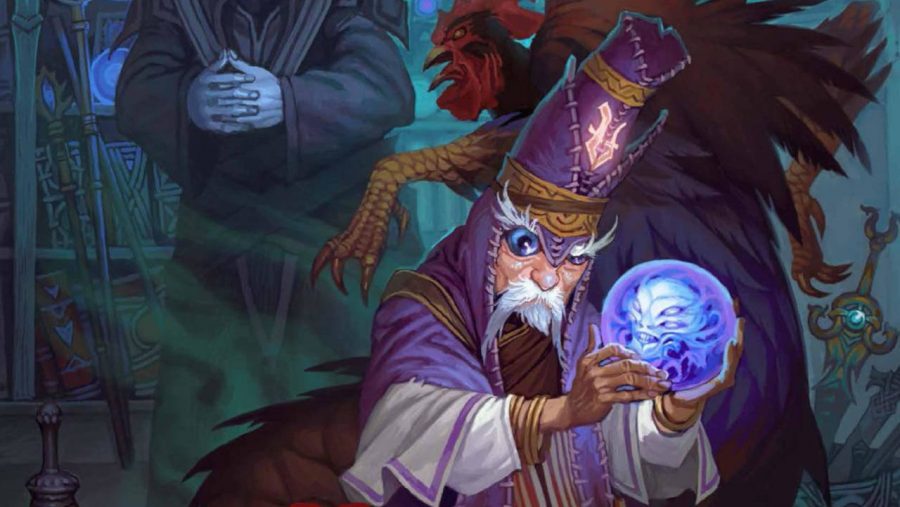 Wizards acquire powerful magical capabilities through rigorous study of the arcane secrets, voraciously reading any and all mystic texts they encounter, to add new formulas to their repertoire. Poor at handling weapons and usually unable to don armour, Wizards rely on the otherworldly might of their spellbook to obliterate or manipulate their enemies into submission.

Wizards must specialize in one of eight arcane schools of magic – such as conjuration, illusion, or necromancy – or adopt a universalist approach to magic and gain a broader, but surface-level, understanding across all of them. Each school offers a diverse array of spells that may dish out deadly effects in combat or be employed for magical trickery elsewhere on your adventures. Invest in Intelligence to support your spellcasting, but also keep an eye on your Wisdom and Constitution scores.